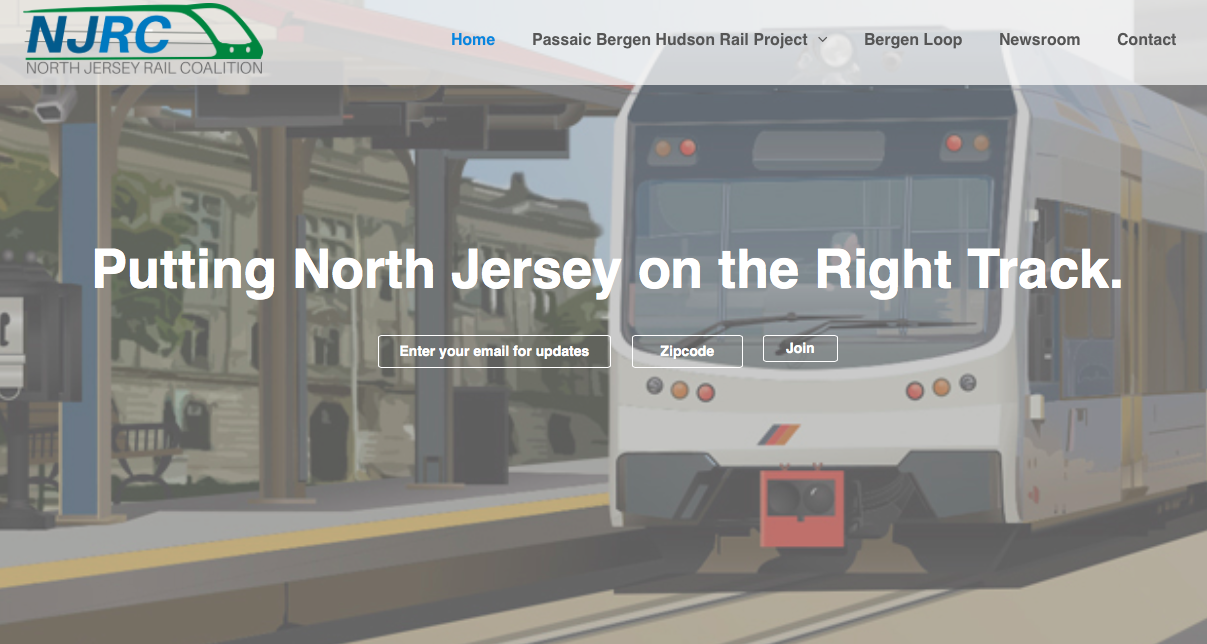 (PATERSON, NJ) – With funding provided by the Passaic County Board of Chosen Freeholders, the North Jersey Rail Coalition launched a website to serve as a hub for information on mass transit projects vital to North Jersey. NorthJerseyRail.org includes information on the Passaic-Bergen-Hudson Rail Project and the Bergen Loop, both top priorities for residents, stakeholders, and elected officials in North Jersey. The Passaic-Bergen-Hudson Rail Project originates in Hawthorne, adjacent to the existing Bergen Main Line Passenger Service station and terminates in Hudson County, offering a seamless connection to the Hudson-Bergen Light Rail at the Tonnelle Avenue Station. At this preliminary stage, there are proposed stations in Hawthorne, Paterson, Elmwood Park, Hackensack, and North Bergen. The Bergen Loop is a vital component of the Gateway Tunnel Project that creates one-seat train service from the Pascack Valley, Main, and Bergen Lines into New York Penn Station.

“Through NorthJerseyRail.org, the North Jersey Rail Coalition is going to continue to spread the word about the importance of ensuring that the Passaic-Bergen-Hudson Rail Project and Bergen Loop are funded and completed,” stated Passaic County Freeholder Director Theodore “TJ” Best. “We are seeing momentum every day in addressing the mass transit needs of North Jersey, including a package of legislation aimed at supporting the NJRC and the Bergen Loop’s preliminary inclusion in the Gateway Tunnel Project. NorthJerseyRail.org will serve as a hub of information for residents and stakeholders and ensure that important projects to North Jersey are funded and constructed.”

The North Jersey Rail Coalition was founded in 2015 by a consortium of elected officials on the local, state, and federal levels. Its primary goal is to advocate for mass transit projects in North Jersey, including advancing legislation, raising awareness, and securing funding to address the mass transit needs of North Jersey commuters. Led by Congressman Bill Pascrell (NJ-9) and Assemblyman Tim Eustace (NJ-38), the NJRC’s first goal is to restart the Passaic-Bergen-Rail Project to drive economic redevelopment, reduce traffic congestion, and create new intermodal links in New Jersey Transit’s system, as well as ensuring the Bergen Loop’s inclusion in the final construction of the Gateway Tunnel Project.

“The Passaic-Bergen-Hudson Rail Project increases access to public transportation, provides an important solution to regional congestion and will help propel northern New Jersey’s economy forward,” stated Congressman Bill Pascrell, Jr. “We have seen tremendous momentum for our cause, including supportive resolutions passed by local and county governments across North Jersey and proposed legislation in Trenton to support mass transit goals in northern New Jersey. I will continue to fight in Congress to secure funding for vital mass transit projects, including the Passaic-Bergen-Hudson Rail Project, to foster economic development and get commuters off our roads and highways.”

“With so many important mass transit projects in North Jersey we need a unified voice to advocate and educate our residents and decision makers,” stated Assemblyman Tim Eustace. “Fortunately, the Bergen Loop is included in the preliminary designs of the Gateway Tunnel Project. However, there is still no identified funding source and its inclusion in the final construction documents are by no way guaranteed. NorthJerseyRail.org will be a source for our residents to understand how vital the Bergen Loop is to North Jersey’s economy and the grave mistake it would be to not include it in final Gateway Project designs.”